At about the age of five I discovered I was adopted. Growing up, I was always curious to why I was the way I was. I promised that as an adult I would get to the bottom of it. Little did I know at the time that personal DNA analysis would emerge that would allow me to trace my ancestry back thousands of years.

When I first received the results of my initial DNA test with the National Geographic Genographic Project about five years ago, I downloaded my results to Ysearch.org, an online public database for Y-DNA haplotypes which helps genealogists determine if two or more males share a male ancestor on their direct paternal line. A comparison search of my DNA returned hundreds of results, most notably in Britain, Norway, Poland, Lithuania, Russia, Ukraine and Central Europe. My haplotype, R1A, is known as the Viking gene for people with Norwegian ancestry. But as I started plotting my “DNA hits” on a map, I saw that many of the hits were in the Transcarpathian Mountains in mining regions. Did the Vikings mine in central Europe? Not likely. For a time I considered that Varangian Vikings, who plied the waterways of Ukraine, were the answer. So I decided to take a more detailed DNA test to narrow down the results. The new test narrowed my DNA results to R1a Z280 CTS 1211,  which is sometimes referred to as the Baltic-Carpathian branch of R1A.

The more detailed results showed close DNA relatives in clusters in Northern Germany and Denmark, in Czechoslovakia, Slovakia, and Bosnia, along with a number of hits in Britain. The greatest cluster of my closest DNA relatives was in Northern Germany/Denmark where the ancient Saxons lived. With this lead, I googled Saxons in other countries that showed matches, and lo and behold, Saxon miners were famously present in all of these locations. Saxon miners were highly prized in Europe by kingdoms seeking to exploit their mineral assets. In fact, these Germans had a name, Carpathian Germans in Hungary and Transylvanian Saxons for those in Romania, where I also have DNA hits. 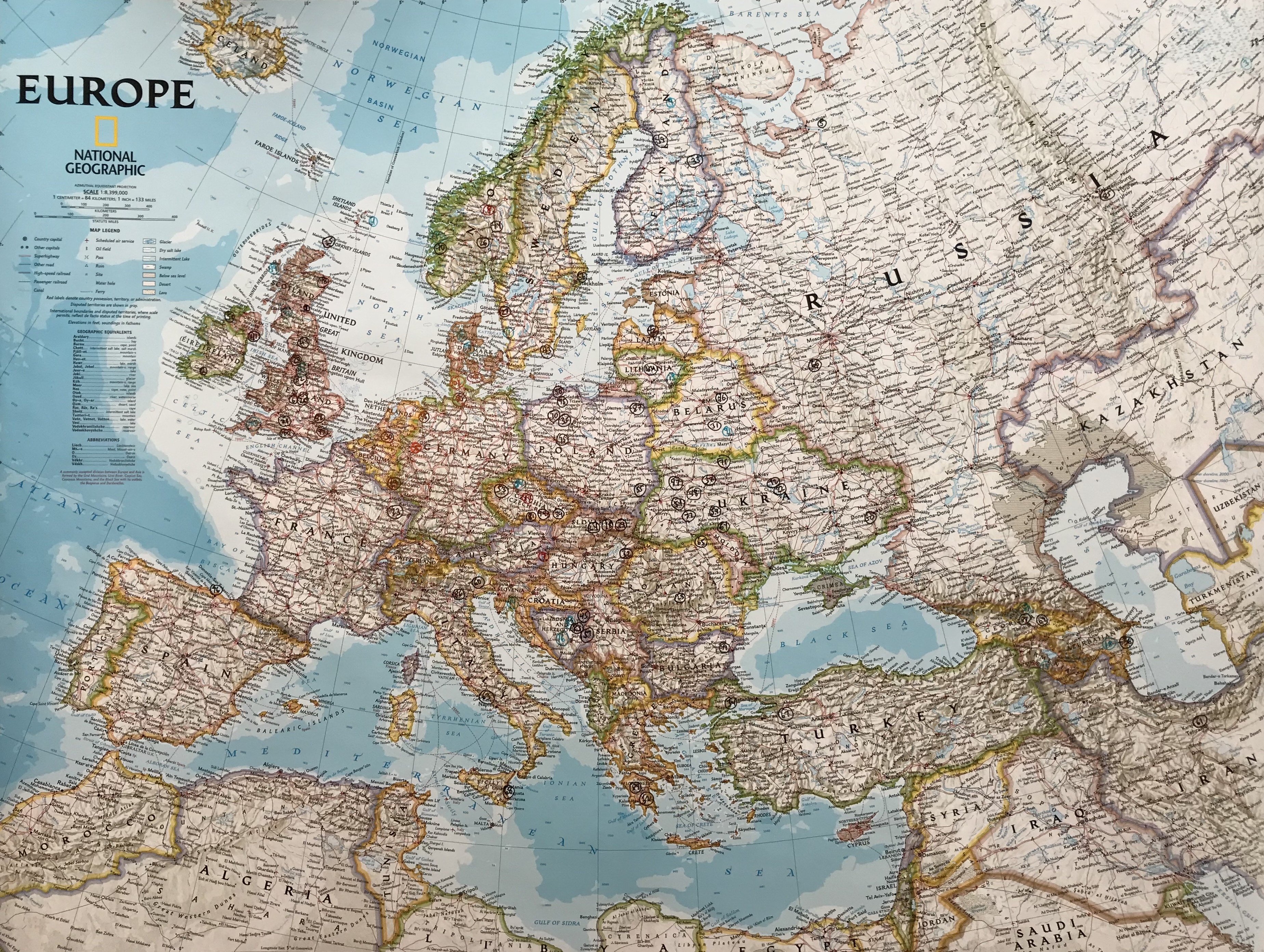 Confirmation of my Saxon heritage came with a cluster of hits near Srebrenicia, Bosnia. Saxons (Sasi) had been mining in Serbia since at least 1254 during the reign of Stefan Uroš I (1243–1276), coming from the Kingdom of Hungary. (It’s possible the Saxons of Bosnia came straight from Northern German, since the DNA is actually a closer match than those in Hungary and Slovakia.) Brcko, Zalazje, and Olovo are DNA hits near Srebrenicia. Silver was mined there, and in fact srebro means silver. Sase is a town very near these hits, and is a derivative of the word Saxon. Also nearby is the Saska Rijeka (River), also a deriviation. Nearby in Macedonia, Saxon descendants are still hard at work in the mines (see the below screenshot from geocaching.com).

Likewise, in Slovakia there’s a hit in Margecany, about five miles from Gelnica (in the Spis region), a royal mining town of the Kingdom of Hungary by 1276. Silver, copper, gold, quicksilver, lead and iron ore were mined here. Carpathian Germans settled this region. In 1243, the King granted special laws and privileges to certain foreigner groups, including the Saxons, to expand mining in the area.

In Hungary, there’s a hit at Miskolc, in the Borsod-Abauj-Zemplen area with a number of mines. In Czechoslovakia I have a number of close DNA relatives, where to this day, there are Saxon parades and choirs that celebrate this heritage. The DNA hits in Ukraine are mostly in the Carpathian region.

This all fits nicely with my first known ancestor, Peter Righter (1664-1744) who arrived in Philadelphia from Germany some time between 1683 and 1700. Peter Righter is my great, great… grandfather on my bio father’s side. Though there is no record of Peter’s arrival, thirteen Mennonite families from Krefeld, Germany arrived at Philadelphia on 6 October 1683. More ships arrived in later years before 1700, also said to be transporting Mennonites or Quakers from the Krefeld region. Krefeld is in northern Germany in ancient Saxon lands (Westphalia) and not far from the cluster of hits in northern Germany and Denmark.

There will probably be no way to determine if Peter Righter was a miner, though clearly he had many close relatives who were. Peter also had close DNA relatives in Norway, and it appears they raided England in the north with the traditional Vikings, according to DNA hits. But Saxon he was.

The Saxons are also famous, along with another German tribe the Angles, for colonizing England. Hence the term Anglo Saxon. DNA hits can be found in southern England in areas known to be visited by Saxons, Angles and Jutes (a related tribe of the Saxons), including the Isle of Wight.

The Saxon link fully explains my DNA for the past 2,000 years. But where did the Saxons come from? The Saxons, as well as most Germanic tribes, came from Scandinavian peoples in present-day Norway and Denmark who moved south into German areas around 100 B.C. The Scandinavian peoples had been in this area for awhile, but where did they come from? Another cluster of my DNA, in the Caucasus, provides a clue and supports a hypothesis by Thor Heyerdahl  that Vikings resettled to Norway from the Caucasus and Azerbaijan. Heyerdahl, if you remember, was the person behind the 1947 Kon-Tiki raft expedition between South America and Polynesia. Heyerdahl spent his last years trying to prove the Caucasus homeland, and now DNA such as mine is proving the point. An article at News.Az titled DNA shows link between Vikings and modern Azerbaijanis has more:

“While speaking about the migration of Vikings from Azerbaijan to Scandinavia, Thor Heyerdahl referred to Scandinavian sagas, including the texts of famous 13th-century Icelandic historian Snorri Sturluson. In a text dated 1220-1240, he talked about events that occurred two millennia ago, apparently referring to now lost sources. According to the text, two generations before the birth of Christ, a King Ogden lived in the Caucasus, ruling a people called the Asams from a country called Azer. Thor Heyderdahl said that Ogden was Odin, the supreme God of the Scandinavian heathen pantheon and found other facts proving the migration of the Vikings, particularly, from Azerbaijan and their common spiritual roots and beliefs.”

According to some historians, the Viking/Caucasus connection is the reason northern Europeans are known as caucasian!

I have five DNA hits in the Caucasus region, including two in Georgia, two in Azerbaijan and one in Armenia. Two of the hits are a genetic distance of only two, showing relatively close DNA affiliation. Interestingly, the hit in Armenia is in the town of Vedi, in the Ararat Province. The province is named after the Biblical Mount Ararat and is actually near the mountain, across the border from Turkey. Who says you can’t trace you’re ancestry back to Noah’s Ark? I’m half kidding.

The Caucasus (and/or surrounding areas) are considered by many historians to be the birthplace of Indo-European civilization, where Aryan tribes first flourished just north of Iran (Aryan) around 3,000-2,000 B.C. Two branches of this civilization migrated out of the Caucasus, one to Europe and one towards India, perhaps around 2,000 B.C. The one that migrated to Europe also appears to have a sub branch that migrated to northern Europe, hence the origin of non-aboriginal Scandinavians (my ancestors).

Astonishingly, my DNA also proves another once-controversial historical argument, that Aryan tribes moved into India, and in the process, established the caste system and Hinduism!

One of my very interesting DNA hits is near the Russian town of Kyshtym, way out near the eastern slopes of the Ural Mountains. This is near the newly-discovered, ancient town of Arkaim, described as an Aryan city because swastikas were found all over the ruins. This city dates back to the 17th and 16th century B.C. Known as the Stonehenge of Russia, Arkaim and surrounding sites suggests a heavy Aryan presence on the Eurasian Steppe, the vast plains that stretch all the way from Romania to Mongolia. Indeed, my DNA can be found along the entire length of the Eurasian Steppe, including in Mongolia at the Xiongnu necropolis of Eglin Gol, which dates back to the 3rd century B.C. R1A peoples with European features migrated as far as the Tarim Basin in China, evidenced by DNA results from the Tarim mummies.

A skeleton with an unusually elongated skull has been found at Arkaim. The skull is elongated because it was bound out of tribal tradition and suggests a connection to the Sarmati tribe.

The city of Arkaim was built in a circle, with an outer circle of 35 houses and an inner circle of 25 houses (arranged like slices of pie). It is said that each house had a unique construction and that each family was responsible for their property. Before I had ever heard of Arkaim I had a vision about an ancient circular community laid out in the same manner, and I can tell you why Arkaim was constructed in a circle. The families were in clans. Each family was responsible for building their “slice of the pie.” Before they learned to build fixed communities they would circle the wagons for protection. Over time, as settlements became more permanent, instead of circling the wagons, each family would build their house, and their share of the fort for the clan. Some of the clan circle forts were rudimentary, depending on resources and manpower. Others, like Arkaim, were much more complex. It was an efficient way to build a house and a fort at the same time.

Perhaps it was near Arkaim where some of my close ancestors split. I know they split because I have a close DNA ancestor (with a genetic distance of only one) all the way down in Sri Lanka. That’s right, the Aryans made it all the way to southern India and beyond. Perhaps one brother went to the east into India, and one to the west, eventually settling in the Denmark region.

My India DNA hits were initially a source of confusion and I first wrote them off as the result of British colonialism in India. But as I gathered more information it became clear the DNA hits were the result of Aryans who migrated into India starting around 1500 B.C. R1A of my type can be found in upper caste Brahmins.

On a side note, the Nazis were correct about an Aryan connection, but DNA analysis has shown that R1A is prevalent throughout eastern Europe, including in the populations of Ashkenazi Jews. It seems the Jews in many cases were more Aryan than Hitler, who has been determined to be E1b1b1, a haplogroup originating in northern Africa and is associated with the Berbers. Napoleon, believe it or not, was also E1b1b1!